Albin (right) and I at Celebration VI, Orlando, FL

My name is Scott.   I am a member of the 501st, Jolly Roger Detachment and Midwest Garrison. I go by TI-373 which is my ID number or Firebat which is my call sign.

I graduated nursing school back in 1997. First couple things I bought was a telescope, new car, and stumbled across a guy who was making storm trooper armor as seen in one of my favorite movies, Star Wars.  I  had to have one.  Around that time I also stumbled across Albin Johnson's page. If I remember right it was just a little GeoCity site. I messaged Albin and we started talking. He told me about the 501st costume group and I joined up. I sent him pics of my costume and picked out my id number. People usually went by the date they were born. I was born May 3, 1973 so I chose 373, hence TI-373. The number is yours forever and no one can take it from you.

At the time of joining Albin and his crew back in 1998 there were only a couple hundred of us. Where I live there was just me. Everyone else was at least 4 hours or more away. So at the time I didn't get to do much trooping.  I kept up with things and found another friend named Randolph Bond who told me about his TIE pilot costume. This led me to Mathew Clayson who made my pilot costume that I current wear (has been updated through out the years) Now there are 6,000+ of us world wide and the group does tons of charity work for children.

I took ten years off and my id number was placed inactive. I became active again in 2011.  My storm trooper costume has since been retired. I currently wear my pilot costume and have a Shadow Scout one I am working on.

I have a lot of fun going to conventions, taking pictures with fans and bringing smiles to little kids.

For more information please check out the 501st group section. 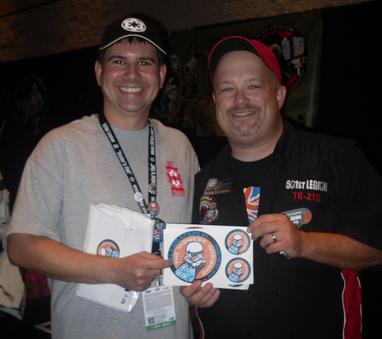